In an article by Nathan Libbey in Moz.com he talks about his research into traffic and asked this question: “True or False: Organic Traffic Converts Better than PPC”.

Mr. Libbey was getting lots of calls from SEO companies who were saying that organic traffic converted better than PPC. His test on the website he managed proved the opposite.

This is how he did his research: “I first found three metal roofing related keywords on our website that had fairly high traffic from both organic and PPC campaigns. Next I broke down the data, comparing the conversion rates separately for organic and PPC. The following is the data, using data from the last 12 months. 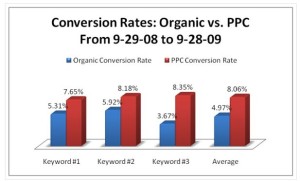 The article was published back in 2009, but that doesn’t necessarily invalidate his results. My conclusion? Do your SEO, but don’t neglect PPC if you can afford it.